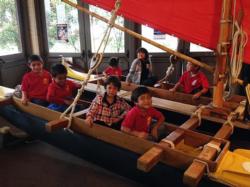 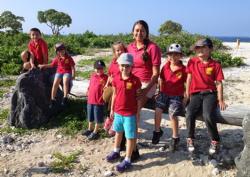 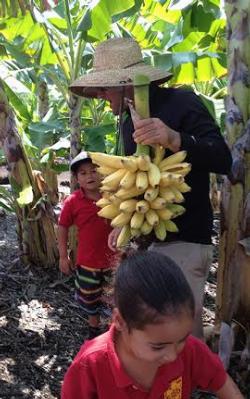 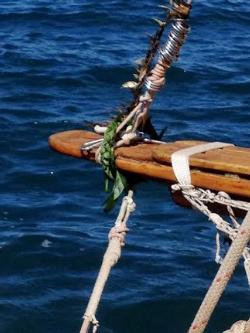 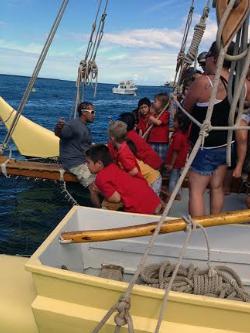 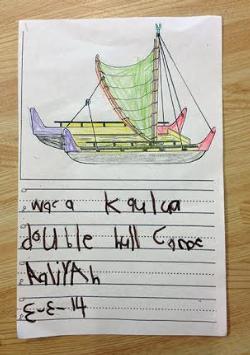 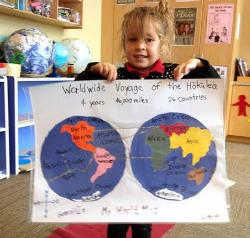 3/7/14 - From Hunehune Kalo: Update on our haumana this year, and what we've been learning.

This school year the theme for our Mälamapokiÿi hui is “Waÿa”. Over the course of the year we have been on several huakaÿi to learn about the waÿa. In August we were fortunate to visit the Höküleÿa when it was docked at Kawaihae. Uncle Chadd Paishon, Uncle Shorty Bertelmann, and Uncle Kealiÿi Maielua were there to tell us all about the Höküleÿa. We learned about the different parts of the waÿa and what it is like to live aboard the waÿa.

We learned about the different plants, animals and food that came on the first voyage more than 1,300 years ago. Uncle Chad showed us a giant world map that traces the route that the Höküleÿa and Hikianalia will travel on as they sail around the world spreading the message of a sustainable future for ourselves and our Island Earth.

The voyage intends to honor, celebrate and strengthen all cultures around the planet by respecting them. We need to mälama our Island Earth - our natural environment, children and all humankind.

In February we had the opportunity to travel to Kona to visit Kohanaiki. Uncle Paolo Costa, the father of Zal, extended an invitation to us to learn about the nature, farm and cultural sites that are in the area of Kohanaiki. Uncle Steve Rose met us there and gave an interesting discussion of the history of Kohanaiki and its cultural sites. We saw a hälau waÿa that was hand-built in the traditional fashion using ohia logs and the leaves of the loulo plant . We learned about the canoe plants that were brought on the waÿa and saw a garden that was planted with samples of maiÿa, ÿuala, kalo and kö.

Uncle Steve told us about the many loko iÿa (fishponds) in the area. He showed us some live ÿöpae ÿula that he had caught in a glass container. We then walked to the anchialine ponds and saw where the ÿöpae ÿula live. The tiny red shrimp are the most characteristic species found in the many ponds at Kohanaiki.

Next we walked to where we could view some of the numerous kiÿi pöhaku (petroglyphs). We learned that the ancient rock etchings were formed a long time ago using only hand tools. Each drawing tells a story. Some  may represent a family lineage, a god or deity, or represent the significance of a location. It is important to mälama the ancient kiÿi pöhaku.

Finally we drove to the farm site. At the entrance is a waÿa kaulua that was built as an educational and community resource. We are very lucky to see so many examples of waÿa, representing collaboration between community, business organizations, and schools.

At the farm we were met by Uncle Aaron. He showed us the many different fruit and vegetable plants growing there. We saw orange, lemon, grapefruit, mango, banana, and papaya trees. We also saw pineapple, squash, carrots,tomatoes, cilantro, and lettuce. We were treated to freshly cut bananas and fresh fruit kabobs.

We ate our lunch under the shade of the banana trees. We enjoyed ourselves very much and want to mahalo and extend our gratitude to Uncle Paolo Costa, Uncle Steve Rose, Uncle Aaron Shapiro, and the management of Kohanaiki for their generous hospitality.